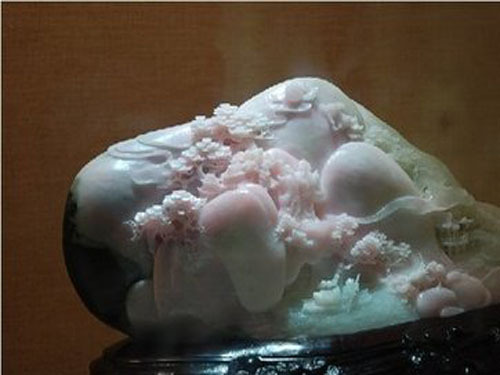 From the "Double 11" Jade Carving Famous Exhibition to the domestic jade carving master carving "Chinese Red" color Nan Hong works to welcome the New Year, in China's Yunnan, Guangdong and other jade distribution center, a large number of traditional jade carving divisions are in touch, appeared on the Internet stage, seeking The road to transformation.

According to a report from the China IT Research Center, as of the second quarter of 2014, the number of Internet users in Chinaâ€™s online shopping has exceeded 332 million. The rapid expansion of online shopping users has laid a good user base for the development of the online shopping market, releasing a huge amount of Market potential. Due to the advantages of convenience, speed, low operating costs, and low inventory pressure, online shopping is gradually becoming part of people's lives.

In the traditional Chinese jade industry, influenced by many factors such as changes in peopleâ€™s shopping methods, the traditional jade wholesale markets and stores in Ruili, Tengchong and Guangdong, etc Yu Wei ushered in the "winter." The multi-domino effect brought about by the change in peopleâ€™s consumption habits has also led to the â€œtransitionâ€ that is the imminent and problem-solving reality of both the traditional storefront jade managers and jade carving artists.

How to transform? Jade carving artists are also seeking a way out.

Changes are happening quietly. The more prominent phenomenon is that some cultural levels are not high. The jade carving teachers who had never been online started to learn Internet knowledge and learn to use mobile WeChat. More jade sculptors with far-sighted knowledge have sought a mature Internet platform to gain certain popularity in their jade carving works through publicity and promotion.

Jadesmith transforms the Internet to choose a quality platform

The reporter visited a number of jade carving masters from Yunnan and Guangdong. Everyone unanimously believed that in order to transform, we must first touch the net, embrace the internet, and choose the platform.

Ping Zhou jade carving master Chen Xinming has been involved in the jade carving industry for 22 years. He believes that under the current market environment, jade carving masters are immersed in crafts, and while the style of the work is appealing to the market, jade carving masters must also embrace the network and open up an online promotion sales channel. "Some jade carving masters have not yet realized, there is no concept of propaganda. Many people are still accustomed to working hard." Chen Xinming said that he himself is very satisfied with the network. For example, the cooperation with Jade E-Commerce Jade Dynasty was very enjoyable. This year's Double Eleven, the Jade Dynasty held the â€œNational First 11 Double Jade Carving Masterpieces Online Exhibition Fairâ€, and Chen Xinming actively provided several works. Finally, Jade The dynasty selected 5 of them for online sales and eventually sold 4 pieces. â€œThe success rate of cooperation with Jade E-Commerce is very high. This is also a very good advocacy opportunity for our jade carving masters. There are such opportunities and we should actively cooperate.â€ He said that embracing the Internet is the future trend. Sooner or later."

The jade carving teacher Chen Yi who had just won the Tiangong Award this year is famous in Guangdong for her bold and innovative contemporary jade carving style. Differing from the subject matter limitations of some jade carving artists, Chen Yi never worried about the lack of creative inspiration. His creative agate theme is becoming a textbook that many jade carving teachers imitate. â€œThe trend of online sales in the next few years, in the future, the traditional store rental will certainly be cheaper, sales are also in transition.â€ Chen Yi believes that many traditional jewelry stores are currently unable to open, because their ideas have not changed, regardless of the product Style or sales channels, are still "singing the songs of the past", so that business will only become narrower and narrower. â€œThe jade carving master or the traditional store operator must follow the trend and must choose a mature network platform for cooperation.â€

As the predecessor of China's jade carving industry, Wang Chaoyang, a famous jade carving master in China, has been at the forefront of the Touchnet team for many years. As early as last year, it signed a number of cooperation framework agreements with the e-commerce Jade Dynasty to promote its works online.

Jade E-commerce looks at the layout of jade carving market

â€œFrom the jade carving industry, it is indeed woolen materials that are more expensive than gold. We must maximize the value of wool. This requires jade artists to give full play to their own strengths and to maximize their artistic creativity. In this aspect, the jade carving industry can find beauty. To promote the United States, the United jade masters create beauty. We have been working for many years, there are some high-quality resources, these resources are also worthy of a resource for jade carving masters.â€ Yang Muren believes that jade carving artists must embrace the Internet, Internet thinking, in order to advance with the times Innovation and development.

Rubber grommets are essentially rubber molded parts which are placed around drilled or punched holes to an opening in a surface. Rubber grommets mechanically eliminate sharp edges providing a cushion of protection for the items which passes through the surface material from tearing or breaking wire, cable, tubing, piping, hoses, air lines, rope, etc, add aesthetic value to your applications. In addition, many grommets also serve as seals.